Which one do you prefer and why? Send us a comment!
Posted by MFL Tomlinscote at 19:09 No comments:

Here is a film some of our year 12 German students have produced for a pasch-net short film competition: The motto was a quote by Johann Wolfgang von Goethe: "Wo viel Licht ist, ist auch starker Schatten" (Where there is a lot of light, there is also strong shadow).

What do you think? Write a comment and let us know!

Do you want to produce a video about the same topic? You could win 500 Euros!
For more info, ask your German teacher! The deadline for the entries is the 30. April 2013.

Before you go ahead, be aware that any entries must only include own photos and copyright-free music, and everyone in the pictures must have given permission to be included in the film.
Posted by MFL Tomlinscote at 19:41 No comments: 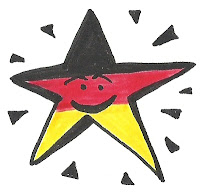 Our Students of the Month this March is a group of boys in 7R, nominated by Madame Christian:
Harry Cox-Day, Daniel Lawrence-Preston, Jack Plummer and Nathan Vincent have worked incredibly hard as a team, and produced an outstanding piece of work: They have created a board game called 'Weathernary' to practise saying what the weather is like in French, complete with a board, set of rules, cards, and playing pieces. Brilliant!

Posted by MFL Tomlinscote at 17:27 No comments: 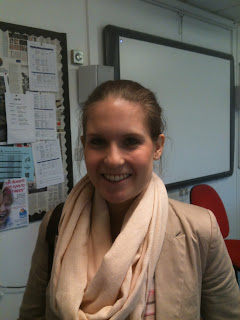 The German department would like to welcome our new colleague from Germany, who will be with us until the end of the school year. Frau Bauer will be helping with speaking practice, as well as teaching small groups and classes. She has first come into contact with Tomlinscote through our German exchange, when she was a pupil at the Robert-Bosch-Gymnasium in Wendlingen (near Stuttgart).
Do make her feel welcome around school!
As music is Frau Bauer's second teaching subject, she is currently involved with our music exchange of 23 Tomlinscote students with a school in Munich, organised by Mr Casselton.
24 German visitors have been enjoying their partners' hospitality since Monday, 11 March. In between trips to London and experiencing lessons at Tomlinscote, the young musicians have been busy practising for their Anglo-German concert tomorrow!
It's sure to be a great success!
Viel Spaß!

Posted by MFL Tomlinscote at 19:37 No comments: 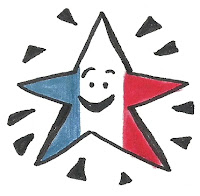 This month we have a very special entry for Student of the Month by a French learner in year 9.
Joel Manning in 9X

has produced this amazing piece of work about clothes and fashion:

He only has gone and created an incredible WEBSITE!!! Fantastique!!!

Please follow this link to admire it in all its glory:

Note that the website is not quite finished as it is a continuous project for the term.


Congratulations also to his teacher Madame Tsang for bringing out the best in her students!

Posted by MFL Tomlinscote at 20:00 No comments: