If you make it to London one of these days, make sure you pop in to Herman ze German for an authentic German fast food experience!
The Currywurst mit Pommes is delicious and you can get Sauerkraut and Rotkohl, too. Those of you who have been to Germany and have tried the fabulous Brezeln or the chocolate bar Duplo - here's the place to get it! The German import Fritz Kola might have too much caffeine for some, but they also have juice and lemonade - and Eiskaffee in the summer.
As staff speak German, you can practise your language skills and order: "Ich möchte bitte..."
Certainly worth a visit - just next to Charing Cross station. Pop in for a Herzlich Willkommen and a Guten Appetit by Herman ze German.

For more info go to: www.herman-ze-german.co.uk/

Posted by MFL Tomlinscote at 16:49 No comments:

Euphoria by the Swedish singer Loreen, already a hit in several countries across Europe.


In second place the 'singing grandmothers' from Russia: Buranowski Babuschki with Party for Everybody. They sing, dance AND bake biscuits at the same time. The song is slightly reminiscent of Crazy Frog....

Well done to Sweden who will host next year's show.
Better luck all round for Euro 2012 and the Olympics!

Posted by MFL Tomlinscote at 16:19 No comments:

Student of the Month - May - Spanish 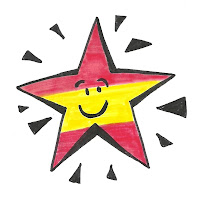 They all have written fantastic texts on daily routine and school which you can admire below!

Shuja Hasnain in 8P for a brilliant piece of work, despite having missed a lot of preparation time due to illness

Rebecca Harrison in 8H for a very high level of grammar, excellent attention to detail and completing exceptional classwork at all times.

Gabi Karaulanova in 8H, who has produced a very detailled and highly accurate piece of work

Susie Snell  in 8P for her extreme hard work in the preparation for this task, which led to an excellent result


Ed Thompson in 8H, whose shows excellent adjectival agreements and super attention to detail (and who works conistently well in class)

and last, but not at all least:
Cameron Williams in 8P who has worked extremely hard to produce a fabulous text on his daily routine and school! and has the honour of being named OUTSTANDING student of the month by Ms Burford!

Well done to all of you! 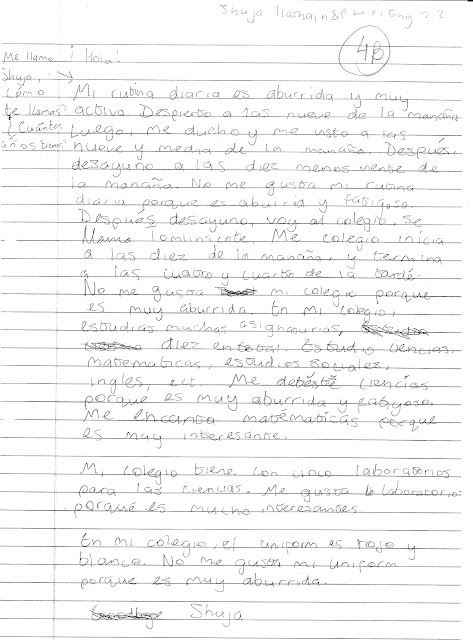 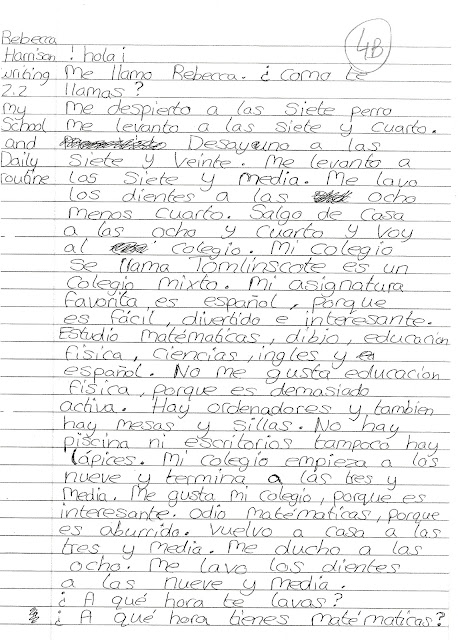 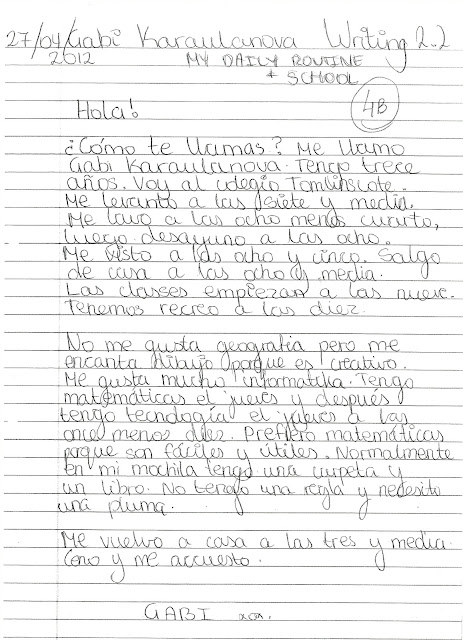 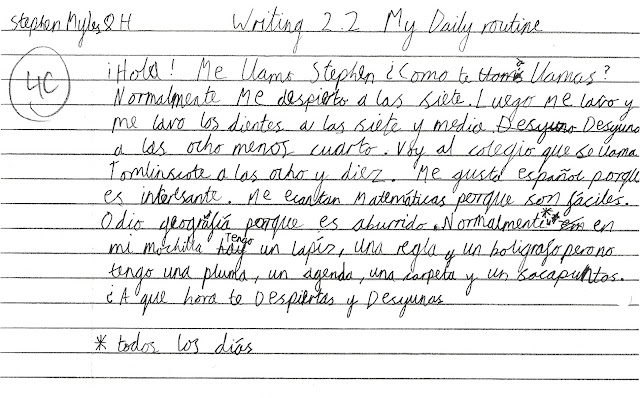 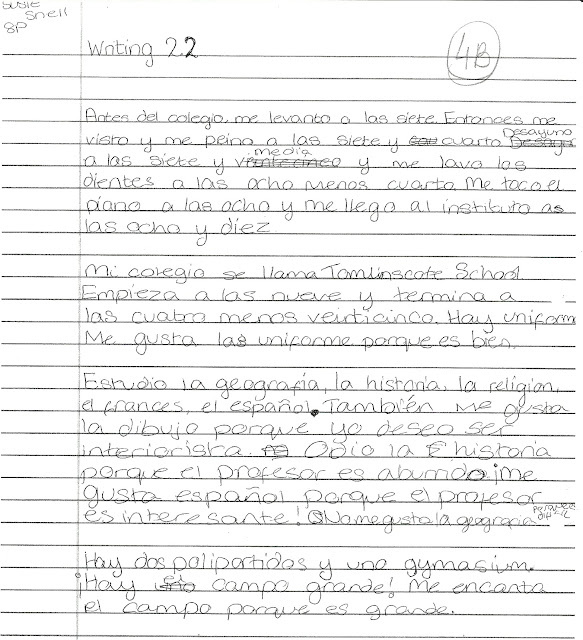 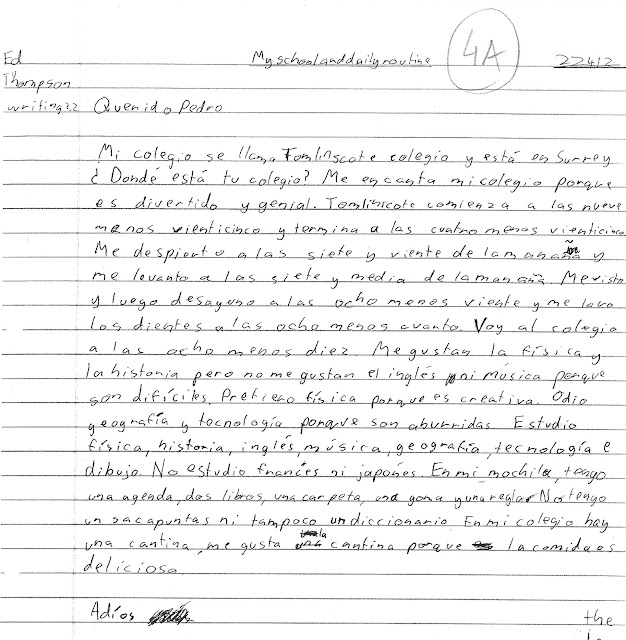 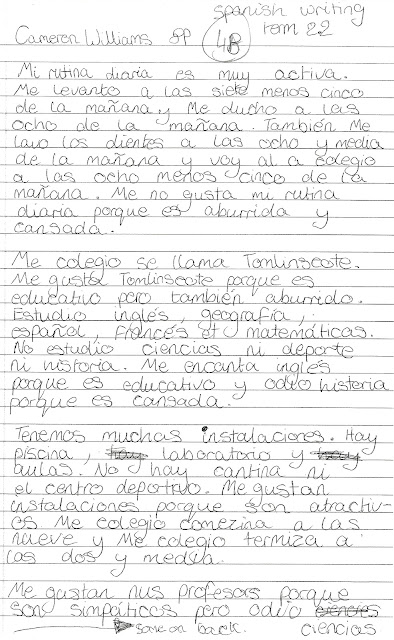 Posted by MFL Tomlinscote at 12:27 No comments:

This year we are eagerly awaiting two major sporting events: The Olympic Games in London AND the European Football Championship! This time it will be held in Poland and the Ukraine from 8th June to 1st July 2012, just before the Olympic Games. There will be 16 European teams competing against each other and I’m sure it will be just as exciting as the Olympic Games, especially for all football fans amongst us!
As a German I will be closely watching the German performance and support “my” team. There are some very talented young footballers in the German squad- Thomas Müller, Toni Kroos, Andre Schürrle, Holger Badstuber, Marco Reus- to name just a few. The German team, currently coached by Joachim Löw, has won the Euro cup three times (1972, 1980 and 1996) and is keen to play well this year, too.  England will also be participating in the competition and play against countries like France, Ukraine and Sweden (Group D), while Germany will be looking at opponents such as Portugal, Denmark and the Netherlands (Group B). Most important, I hope to see a lot of thrilling games as well as fair play and hope that the strongest team will win in the end. Football is very popular in Germany, so in the four weeks in June many people will meet in public places and beer gardens to watch a number of games on big screens (public outdoor screenings), like they did back in 2006 when the world cup was held in Germany. Let’s hope for nice weather!

Posted by MFL Tomlinscote at 19:38 No comments: 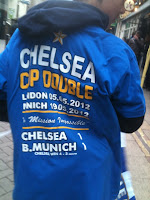 Posted by MFL Tomlinscote at 01:24 No comments: 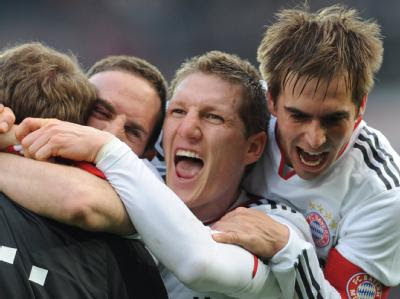 a little German reading comprehension task for you...

Posted by MFL Tomlinscote at 17:19 No comments: 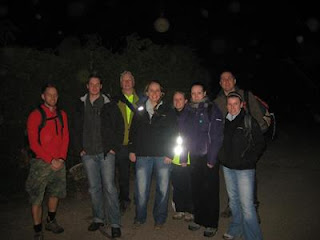 Ten of our Tomlinscote staff are endeavoring to climb three peaks in 24 hours in order to raise money for the charity Cancer Research UK.

During half-term, they will ascend on Ben Nevis, Scafell Pike and Snowdon - all in one day!

Do show them your support around school, and please (get your parents to) give generously for their very worthy cause via this website:  http://www.justgiving.com/tomlinscote3peaks

Good luck to them and  Thank you! Danke! Gracias! Merci! for your support!
Posted by MFL Tomlinscote at 21:28 No comments:

Student of the Month - May 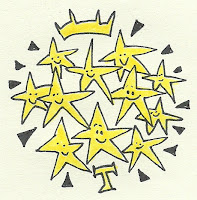 Miss Merle says Well Done to 7Y for their presentations on my town!
Here are some examples:

(Go through the slideshow with the arrows under the picture!)

Posted by MFL Tomlinscote at 17:52 No comments:

Labels: French, Student of the Month

It's that time of year again: Not only is spring in the air (despite the British weather of floods AND a serious draught), but we have also started the countdown to the EUROVISION SONG CONTEST 2012! Hooray!

Music fans and MFL fanatics relish this opportunity to listen to foreign language songs, to try to sing along to catchy Finnish tunes using the subtitles and to vote for our favourite European neighbour.

Here are some of this year's entries, to get you into the Eurovision mood and give you a chance to predict the unpredictable winning nation (who'd have thought Lena from Germany would make it two years ago?):

Luckily for us, the biggest countries (and mother nations of the languages we teach at Tomlinscote) already have their guaranteed place in the final on the 26th of May:

This is the French entry: The song is called Echo (You and I) and the singer is Anggun, an international star who has sold over 2 million album copies around Europe.

Here is the wonderful Spanish song Quédate Conmigo (Stay With Me) by Pastora Soler, who is very well-known in Spain and famous for combining diverse musical styles like copla, flamenco and "Canción Española" with pop. She is considered one of the best voices of the Spanish music scene, and this truly beautiful power ballad might have a good chance of winning!


Representing Germany is Roman Lob with the song Standing Still. He was unknown until he won the German talent show Unser Star Für Baku. Unfortunately the song is all in English. Boring!!! Boooo!

Also Italy is automatically qualified for the final with this song: Nina Zilli sings L'amore è Femmina (Out of Love). The slightly scary Nina has spent most of her life in Ireland and the US, thus singing mainly in English with only a few sentences in Italian. What a shame!

The British entry is, of course, sung by the legend that is Engelbert Humperdinck. The song is called Love Will Set You Free, and is actually quite nice, even though Humperdinck looks about 150 years old (when he's only 101).

Here is a secret tip for you: Will Montenegro make it into the final with this song???
Give it up for Rambo Amadeus with Euro Neuro! "Stay cool like a swimming pool!"

So, who's your favourite? Vote here! Write a comment to let the world know!

Student of the Month April 2012

Sra Metcalfe would like to nominate two whole classes for Student of the Month this time:
Her 10 B and 10 C have worked fantastically well on spontaneous conversation and have made huge progress!

Magnifico!
Posted by MFL Tomlinscote at 12:15 No comments:

Today’s the 1st of May! One could assume it’s just like any other beginning of the month but I can assure you it’s not. In Germany, Monday night has been a special one! Every year people in Germany gather on the evening of 30th April and dance into May (“Tanz in den Mai”) -but why?


Actually, in the past the 1st of May commemorated Saint Walpurga, an English abbess who lived between 710 and 779. The 1st of May was the day on which Walpurga was canonised and a very popular festival in medieval Europe. The night leading to this feast day was called Walpurgis Night (“Walpurgisnacht”) after Saint Walpurga. Many people argue that Saint Walpurga was not the real reason why this day is still remembered. In fact, it is claimed that “Walpurgisnacht” had already been celebrated as a spring festival by Germanic tribes long before there were any Christians.
People believed that every year on that night witches from all around the continent would fly on brooms, pitchforks and animals to meet on top of a mountain called “Blocksberg”. They would light a big bonfire, dance around it, sing and have a rowdy party. What for? To worship their master, the devil! He would then grant them new magical power in return.


Some people have appointed the mountain “Brocken” in the region “Harz” to be the setting of this legend.  This is why every year thousands of people come to the „Harz“ region to enjoy these festivities which are accompanied by various events like concerts and fireworks. The first organised Walpurgis Night took place in 1896. Today, people dress up as witches, dance witches’ dances (“Hexentanz”) and there is a big witches’ bonfire (“Hexenfeuer”).


In other towns and cities around Germany there are numerous opportunities to celebrate this occasion- mainly in bars, pubs and clubs. On that night people dance, party and drink May wine (“Maibowle”), an alcoholic cocktail with fresh fruit and flavoured with woodruff. Dance into May is a very popular way to welcome the month May and is loved by all generations, especially younger people.

Posted by Tomlinscote MFL at 08:00 No comments: