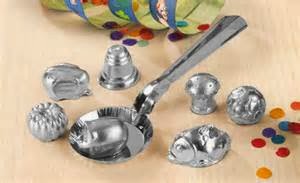 Bleigießen (pronounced Bligh - geese -n) is a tradition popular in Germany and other Nordic countries to predict what the future holds for the New Year.

Silvester (New Year's Eve) is usually celebrated with friends at big parties or a dinner party with card games.

Popular meals for these occasions are those that can span several hours, often with a French origin, like fondue (where each person has a skewer to cook a piece of meat in a pot of broth on the table) or raclette (where you melt cheese over vegetables and breads in a special table top grill).

Just before midnight, you have to count down the seconds, of course, and after shouts of 'Frohes Neues Jahr!' (Happy New Year!), you do 'zuprosten' (raise and touch your glasses of champagne or sparkling wine and say Prost! (cheers). Then you go outside and watch the Feuerwerk (fireworks), or set them off yourselves. Hundreds of Raketen (rockets) light up the sky and loud 'Böller' (bangers/firecrackers) are supposed to chase away evil spirits.
For good luck, many Germans also eat a Krapfen or Berliner (jam filled dougnut) after midnight.


After that, in the early hours of the new year, many people do Bleigießen.

Also known as molybdomancy (if you like a fancy word for your next round of Scrabble!), it is the the technique of predicting the future from molten metal. The literal translation is 'lead pouring'.
People do this together at their Silvesterparty to see what the new year might bring! 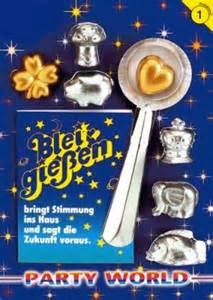 In Germany, you can buy kits for this:
They contain small light figures made of lead  (or zinc, which is less toxic), a spoon and a list of interpretations.

You melt one of the figures in the spoon over a candle, and then pour the liquid into a bowl of cold water. The resulting  'sculpture' then needs to be identified (you probably need quite bit of imagination for this!) and interpreted according to the list.

A pig or a frog, for example, could mean you might win the lottery, while a sword could mean 'problems in your job'.

The tradition of reading the future from molten metal goes back to Roman times, but these days it's just a bit of party fun and few people really believe in it. 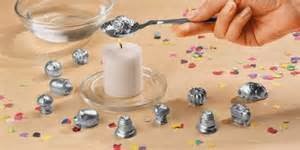 Get a candle, a bowl with water, and old spoon and some wax. Melt a small blob of wax in the spoon and then throw it in a bowl of cold water.
Use your fantasy to make out what the 'sculpture' is and make up what you think it means...

Here is a German website with interpretations for the different shapes: go on the letters at the top - and use an online dictionary... 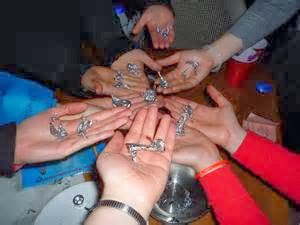 
Alternatively, if you have a smart phone there are even apps for Bleigiessen - check it out, but beware - you might have to pay!

Posted by MFL Tomlinscote at 23:45