Here is the account by Charlotte Lauder, one of the three new German language ambassadors who went on a three week residential intensive German course in Schwäbisch Hall: 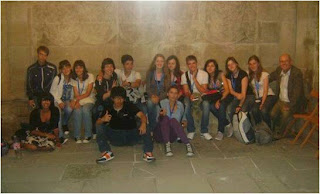 On 31st July 2011 Dayna, Chiara and I departed for Schwäbisch Hall, near Stuttgart in Germany for a Goethe Institute PASCH Youth course, undoubtedly one of the best experiences of our lives.
There were 60 students from 12 different countries on the course, including people from Ecuador, the USA, Great Britain, Spain, Belgium, Bosnia and Herzegovina, Greece, Ukraine, Estonia, Ghana, China and South Korea. For 3 weeks we lived together in a guest house.......
and attended classes in intensive German. When we arrived we had expected to be put together in a room, however we were all split up and everything was done to encourage us to speak as much German as possible! I was put with a girl from Bosnia and a girl from South Korea and we are now the best of friends. On the second evening we had a Kennenlernabend, where we got to know each other and it was the beginning of some great friendships!

Our lessons took place in a Fachhochschule, an old university in the town that was only 2 minutes walk from the Goethe Institute, where we were able to use the library and have our lunch every day. At the beginning of the course we took a grammar exam to put us into our classes, Chiara and I were put into Rainer’s Class, we focused on learning about history. My German definitely improved considerably throughout the course because we were forced to speak German to one another all the time! Near the end of the course everyone took an official Goethe Institute exam, ranging from A1 to C1.
At the beginning of the course we also picked a project to work on throughout our 3 weeks, either the course magazine, theatre or a project about mobility. All 3 of us chose to take part in theatre, where we either took part in the play Geldkäppchen – Little Yellow Riding Hood (in honour of the Goethe Institute), or Aschenputtel – Cinderella, which we performed at our leaving evening at the end of the course. We wrote and directed the plays ourselves so it was a really big achievement for us at the end! 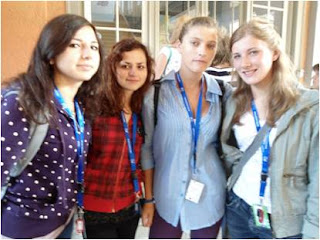 Every Saturday we went on excursions, on the first Saturday we visited Nuremberg, first visiting a Dokumentationszentrum in the morning and then shopping in the afternoon! The same evening we had a Flirt Party and people could write anonymous letters to one another, a lot of fun even though we really were exhausted at the end of the day!
On the following Saturday we visited Stuttgart, the capital of the state of Baden-Württemberg. In the morning we visited a Mercedes-Benz Museum and in the afternoon we were given free time in the city. That night we also had a Switch Party, where the boys had to dress up as girls and the girls as boys!

During the course we also had a Länderabend, when each country did a presentation about where they came from and we also tried one another’s food. This along with evenings involving sport, singstar, the music evening, beauty evenings and parties are what probably made the course most memorable for us and allowed us to really bond with each other.
However the leaving evening was definitely the most memorable, when some classes sang a song, the projects presented their findings, and awards from the course were given out. Michael from Greece also played the piano, which was a regular occurrence on the course! The evening ended very emotionally, considering we still had one final day until we all had to say our final farewells…
The very final evening was celebrated with a party and that night, as a gesture of the amazing friendships we had made, everybody stayed up all night because those from Ecuador had to leave at 3.30am. It was extremely difficult to say a final goodbye and everybody was very emotional but we are all still in contact and we are all sure that we have made some amazing long-life friendships through this unforgettable experience!

Posted by Tomlinscote MFL at 11:50