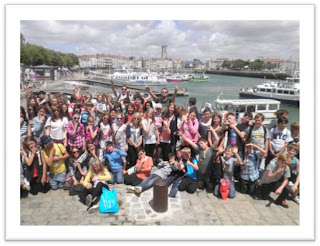 This account of last year's year 7 trip to France was never published...better late than never:

Our Week In France
Monday
Today, we all got to school at about 2.30am (!) and promptly left for France. We travelled for approximately 2-3 hours, before getting on the ferry, at which point we met up with the other French group. We were allowed to wander around for an hour, before getting back on to the coach, and travelling for 8 hours, to get to the Hotel. Luckily though, we stopped after 4 hours for lunch. When we finally arrived...
...at ‘Hotel du Futuroscope’, we got settled, and then went out to the field to play before dinner. We were all so exhausted that day after what seemed like the longest day ever (20 hours!!!!) that as soon as we got into bed, we were out like a light.

Tuesday
Today we were all so excited, because we were going Futuroscope, which als 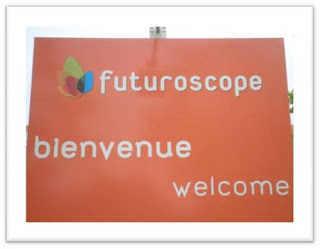 o meant that this was the only time during the week when we would get to see the other French group (7X and 7P) and see all of our friends. Yet again, we got up quite early so we could get a full day in Futuroscope. We were also quite curious as to what breakfast would be, and we were very pleased. We had croissants, hot chocolate and a Capri sun. Futuroscope was amazing. There was so much stuff to do, and we went on many different simulators. Mostly, people were excited about one particular ride; Danse avec les Robots or Dance with the Robots. It was so good, and most people really enjoyed it. We went back for dinner, and then returned for the laser show. The laser show was breathtaking, but it did mean that yet again, everyone was so tired.
Wednesday
Today, most of us were woken up early in the morning by thunder and lightning. It was raining so hard by the time we got up. This didn’t really matter that much though, as we wer
e going to La Rochelle that day, which is 2 hours away. We had the s 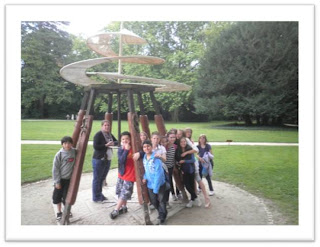 ame thing for breakfast and sure enough, it was beautiful weather in La Rochelle. First, we walked to the harbour and stood under one of the two massive towers, guarding the entrance to the port. We were then all allowed to walk around in groups of four, and go around the town and into the shops. We all met back after an hour and a half, and then headed to the aquarium. This was also amazing, and there was lots to see. Back at the hotel, everyone went to the field again before dinner, and crashed on their beds after.
Thursday
Today, we all had to get 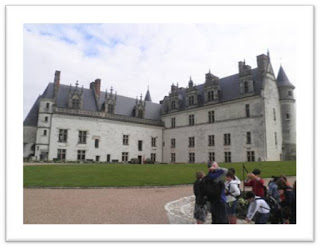 up at 6am and go to breakfast, so everyone was really tired. After breakfast, we went to the castle and had a guided tour of it; or at least what’s left of it, because only 20 percent of it still remains. It was really interesting, and we all really enjoyed it. When the tour was over, we walked down into the town, and did a bit more shopping. This was really nice because there were lots of little souvenir shops, and cafes for us to have lunch in, so everyone enjoyed wandering around into town. After and hour or two, we walked up to Leonardo Da Vinci’s old house. The best part was the garden which were MASSIVE and were full of his inventions, which you could actually go up, and touch and play with, or even play on! It was so much fun. After packing, everyone was really excited about the rumours of kebabs and chips for dinner, and they were true! Not only that, but we also had waffles for desert! We all had to get an early night, in preparation for the long ride home, but we were all still hyper from the waffles, well, I was.
Friday
Today was our last day, so we got up, and went to breakfast, then got on the coach. We stopped several times, including a lunch stop at Flunch, which was quite nice. Passing Paris we saw the Eifel Tower, but then we got stuck in lots of traffic. As a result of this, the coach drivers said that we wouldn’t ha 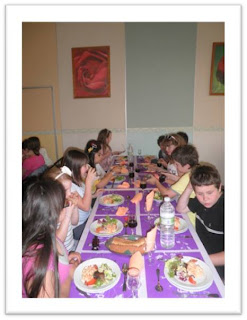 ve time for our planned stop at the hypermarket. However, because we did
n’t go to the Hypermarket, we got the 6.30pm ferry instead of the 8.30pm, which we were meant to get. This then meant that we arrived back at school 2 hours early. On the ferry though, we saw the forms that had gone to Germany, and we got to talk to all of them. When we finally got back to school, everyone was so glad to see their families again. And then they realised they had to go back to school on Monday. Oh deep joy.