The latest CBI and Pearson report on 'what employers need from education and skills' has once again shown the importance of languages. The report published today is based on a survey of 542 organisations, who together employ around 1.6 million people:

"Languages will help open up new markets to UK companies
Operating effectively in a global economy relies on the right language skills, but the UK has the worst language proficiency in Europe, according to the Education & Employer Taskforce. An overwhelming 72% of businesses say they value foreign language skills, most importantly for building relations with overseas contacts (39%). The major European languages continue to be the most in demand, but language skills geared towards doing business in China and the Middle East feature prominently: 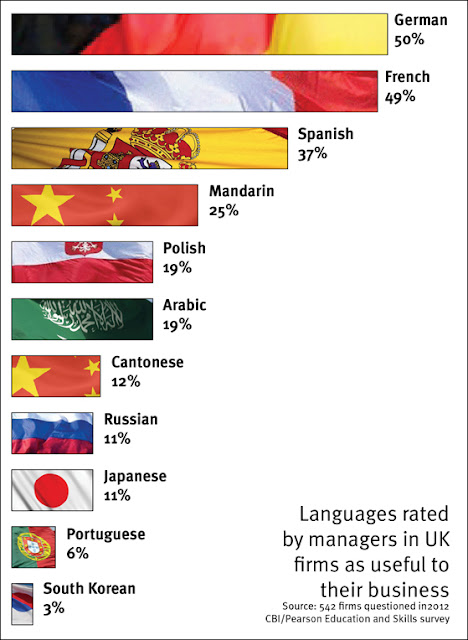 Just as well you can study the top four and number nine here at Tomlinscote!
Work hard in your MFL lessons - your skills will be appreciated by future employers!

To read more on future changes to primary teaching have a look at this article in the Independent:

Amongst other things, the article talks about introducing languages as a compulsory subject in primary schools. Of course, our main feeder schools are well prepared, as with a little help from their neighbouring Language College, they have been providing weekly German and/or French lessons to years 3 to 6 for many years now!
Posted by MFL Tomlinscote at 20:55